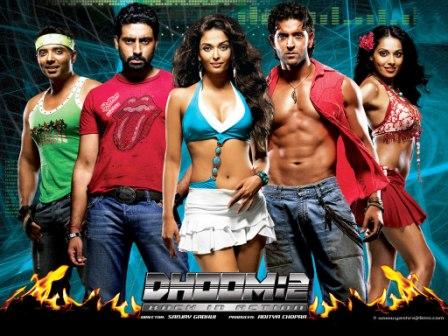 If you go to the movie looking for some non-stop action, you might mostly end up disappointed. After all, Dhoom 2 is a bollywood movie and how can a bollywood movie that is looking to be a hit do without songs? And it is the songs that come in all sorts of odd places and start playing spoilsport. Many parts of the movie just drag on to add to the woes. There are a few good sequences …. for example the train robbery scene at the start, Hrithik’s escape after he commits the theft in the museum and the modus operandi of the theft itself.

I think Dhoom 2 in its present form might have been a total disaster had it not been for Hrithik Roshan. Who knows … it might still end up as one. Without Hrithik, it would have been kind of difficult to sit through those scenes that seem to just drag on endlessly and those songs that have such an ordinary music that even dolby digital can’t do anything. Hrithik simply overshadows Abhishek who just doesn’t look capable enough to match him in anything. I was just thinking in the movie hall that the director and his crew had made a good decision not to bring Hrithik and Abhishek together in any of the songs, when this song suddenly came up that has both of them. Abhishek looks just short of stupid in it. He really needs to somehow improve his dancing skills. They are woefully inadequate.

Bipasha Basu has been totally wasted … her presence in the second half seems to be just to give Uday Chopra some female company he is badly in search of. Aishwarya Rai at least has some role to be played in the movie. That being said, Uday has acted well I must say. Some of his day-dreaming scenes that appear on screen whenever he meets Bipasha are really funny.

About the story …. well I am not going to play spoilsport by revealing whatever little is there of it. If you like Hrithik, you should just go and watch this movie …. and thats probably all that is there to it too.