Though Mani Ratnam denies that his latest movie “Guru” is based on the life of businessman Dhirubai Ambani, there are simply too many coincidences in the film that speak otherwise.

Guru is a rags-to-riches story of Guru Kant Desai (Abhishek Bachan) who, though advised by his father not to dream, dares to and goes on to create India’s largest public company. The movie starts off with Guru being offered a promotion and a pay hike for his excellent performance at work in Turkey. Instead of happily staying on, he choses to quit the job to return back to his village and start his own business. A significant part of the capital that he needs to start his business comes by way of his marriage to Sujatha (Aishwarya Rai). I do not intend this post to be a spoiler for those who want to see the movie and hence cut short posting the story of the movie here. 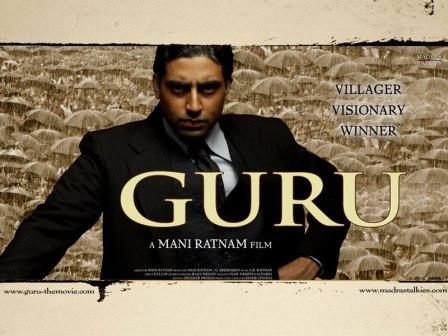 The positives for me in the movie are Abhishek and Aishwarya’s portrayal of their characters, fine camera work (especially for a few of the song sequences) and some of the confrontation scenes (between Abhishek & Madhavan and between Abhishek, Madhavan & Mithun). Both Abhishek & Aishwarya I feel have done a fine job. Madhavan and the lovely Vidya Balan are also impressive whenever they appear on screen. What is however certainly not impressive is their supposed-to-be-passionate kissing scene that that takes place amidst a heavy downpour 😦

Mithun da is in a strange role I have never seen him play before. He has carried it off well. Its very hard though to imagine him without his trademark “Aiyee saalaa” or his dance sequences. Here is a snap of his from the movie for you to stare in utter disbelief:

I heard the songs of Guru for the first time today in the movie hall … now don’t blame me entirely for not hearing them even though the audio got released ages back …. I hardly get to watch TV these days and I don’t have the luxury of the songs being played all around me any more as I am in Chennai these days. After hearing them for the first time and being a die-hard A.R. Rahman fan, I must say that I am a tad disappointed. I would however have to listen to the songs a few times more before drawing any final conclusions as the full import of A.R. Rahman’s wizardry usually takes some time to get completely registered.

Coming back to the movie, I found the ending to be a bit unimpressive; not that I have a ready answer to how one could have made it better. The part near the end where Guru compares his struggle to that of Gandhiji’s freedom struggle was especially a bit too much for me.

To sum it all up, the movie is certainly worth a watch, especially for the performances by the cast.

Here are two quotes from the movie that kind of stayed in my mind:

The one that however takes the cake and makes Guru a Management Guru is the following one: “Think Big, Think Ahead and Think Fast”.